I like ads within Windows. There, I’ve said it.

By ads, I don’t mean crapware, like the omnipresent Candy Crush or similar apps that clutter consumer PCs. Nor do I like to see banner ads, pop-ups, and other commercial advertising that publishers inject into webpages or even Windows to pay the rent. No, I mean Microsoft reminding us of new features and services that we can and should take advantage of.

For those of you gasping in horror, I get it. We’ve published a list of ways to help block advertising within Windows 10, and we were one of the first publications to point out the absurdity of ads in built-in Windows apps like Solitaire and Minesweeper. Those ads are still in place, by the way, although a subscription to Game Pass Ultimate eliminates them.

The irony here is that Solitaire never really changes all that much. But Windows does. And now that we live in an age of services, where operating systems and individual apps are constantly updated, there’s still a need to communicate what new capabilities have been added to Windows, and what (if anything) has been taken away. 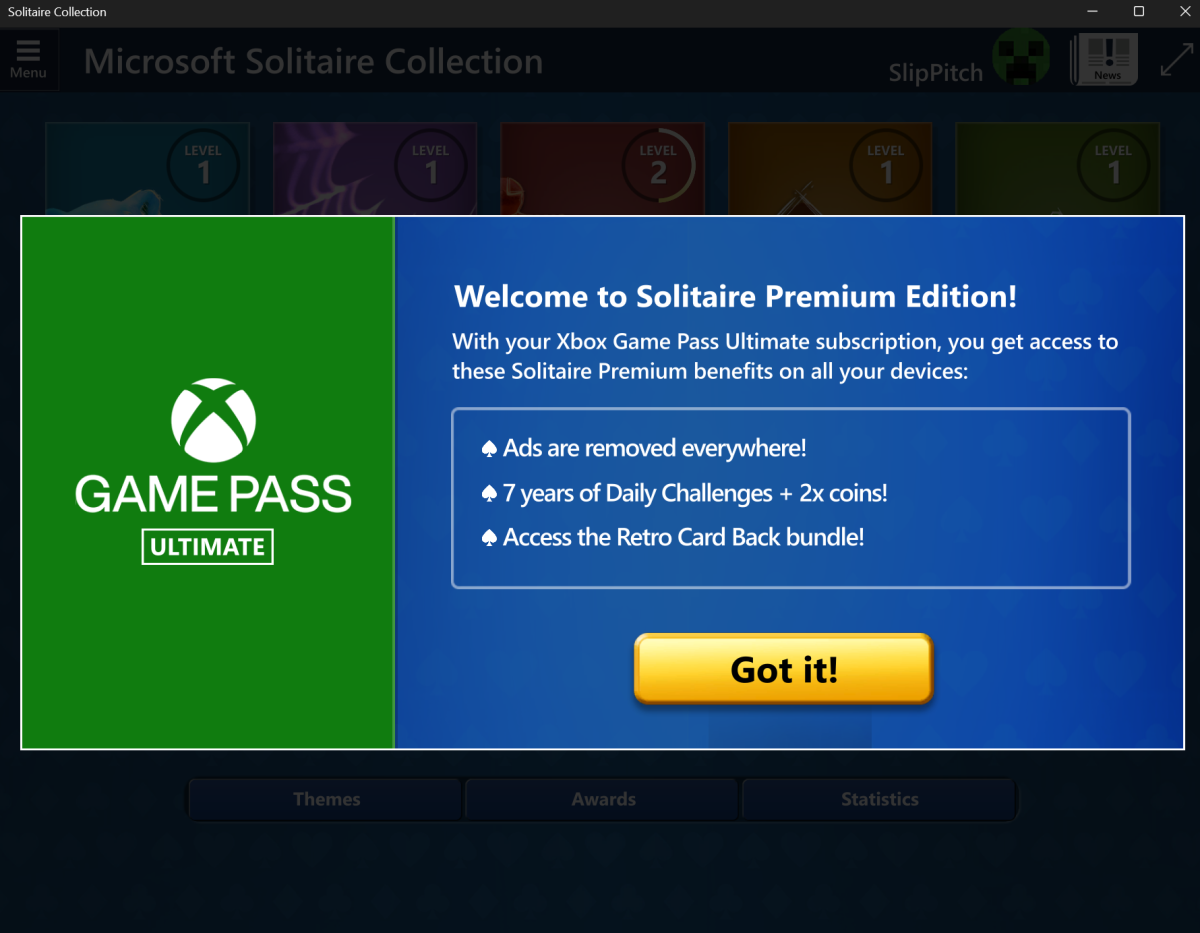 It still is deeply bizarre that Solitaire has ads.

I think it’s fair to say that most of PCWorld’s staff vehemently disagrees with me. But I’ve been saying as much for the last seven years. My review of Office 2016, for example, ended it with a long plea that Microsoft do a better job simply telling us what it plans to add to Office. The concept benefits both sides: We learn about what new things we can do with the product suite, and Microsoft uses it to justify what is now an ongoing subscription to Microsoft 365.

Ads (or in-OS notifications, or whatever you’d prefer to call them) weren’t as necessary throughout the last few years, when Microsoft’s feature updates to Windows 10 totaled a few small tweaks each spring and fall. But Microsoft currently resides within some weird no-man’s-land where they’ve still committed to an annual feature release — down from two — but have also publicly stated that its developers can and will roll out new features whenever they’d like. I’d like to think that the entire world read our story of Windows 11’s spring 2022 update, but that’s obviously not true. The case, then, is pretty simple: We need these notifications more than ever.

However — and this is a big however! — we also need a simplified, formalized way to handle them. Readers have clearly told us that they dislike being distracted by notifications popping up in the oddest of places, like File Explorer. Thankfully, we’re no longer seeing suggested apps crop up in the Start menu. Microsoft does publish a big, splashy presentation as the opening page of Microsoft Edge to mark a new feature update, but that’s obviously rare. 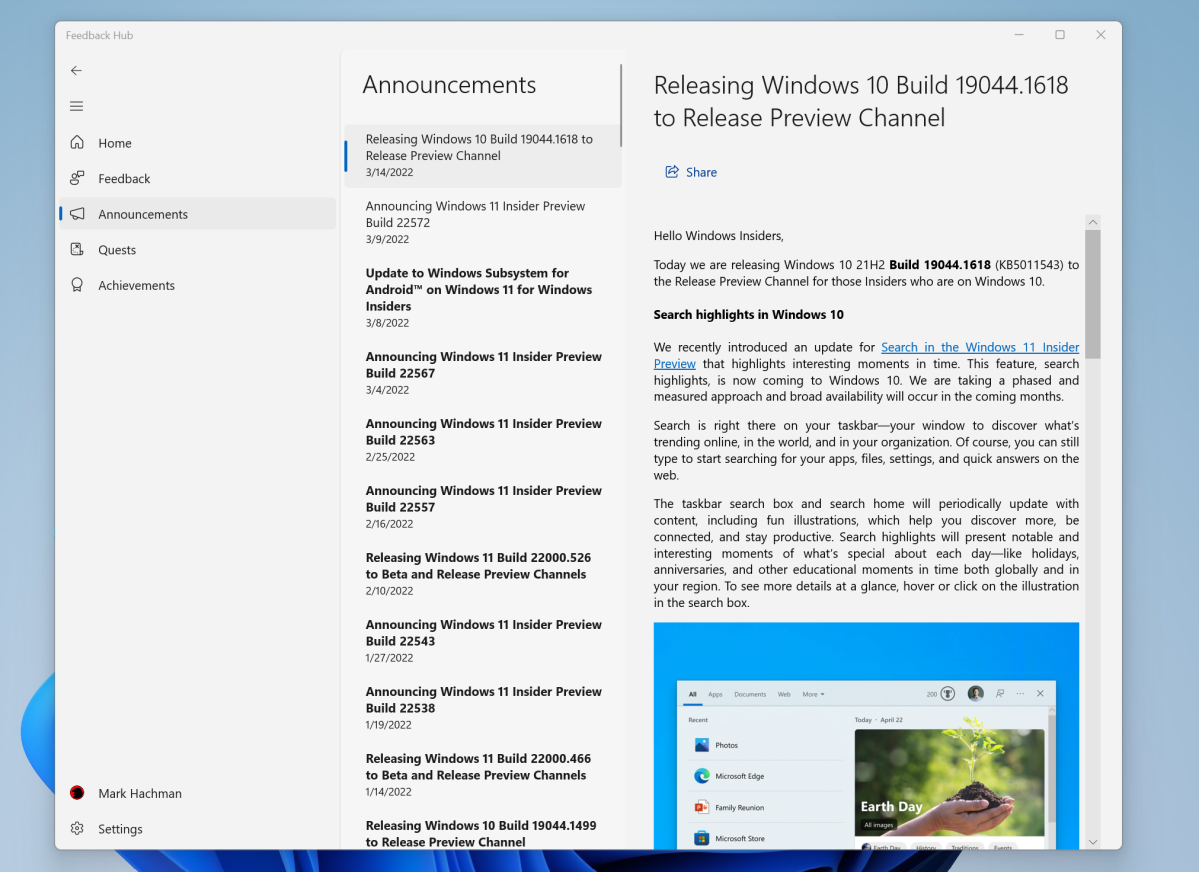 If Microsoft intends to release additional features on an ongoing basis, then we need something new. We already have a way to ask or complain about new features in Windows, an app known as the Feedback Hub. Feedback Hub includes an Announcements tab, sure, which is particularly handy for announcements of new Windows Insider builds. But doesn’t it seem a little weird that we don’t have a formalized structure for announcing new changes within Windows — something easily viewed, easily dismissed, but archived in case a user wants to review it? With some way of building off the changes, providing feedback, and improving the product?

For years, launching an app that had been recently updated typically included a large popup that described the changes, like OBS in the screenshot below. Microsoft doesn’t do that. Why not? 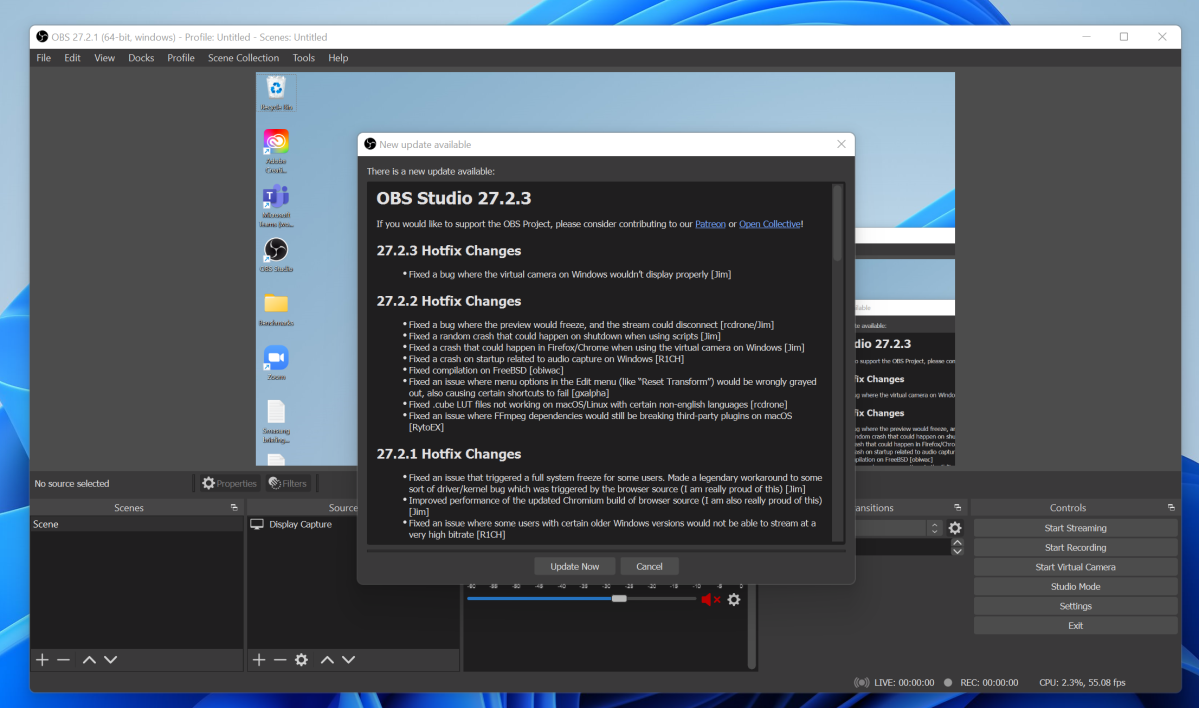 Feedback Hub could be that solution. However, the app hasn’t made a cultural impression. Windows users implicitly understand that Outlook (or, rather, Mail) is what you use to send an email. If you want to launch an app, you open Start. If you want to find out what’s new in Windows, you go…where? Tips? To the browser? There simply isn’t a simple way of discovering what’s recently changed, and what to do about it if you want to suggest alternatives.

If Feedback Hub was that mechanism, imagine what might happen when updates arrive. The Feedback Hub pops up, summarizing what’s there; some users read it, while others immediately dismiss it without a second thought. In, out, and done. Isn’t that what we want?

The gray area, of course, is when Microsoft wants to promote a paid service — say the example above where Microsoft allegedly promoted Microsoft Editor, a paid aspect of Microsoft 365. Part of me thinks that offering a user a solution to a problem makes sense. But this only really works in very limited scenarios, where Windows clearly understands the problem and can offer a solution. If a user sits down to write a paper, they want to focus. If a user has 100MB left in their free OneDrive cloud storage app, suggesting an upgrade makes sense. Even then, I’d prefer to see a small Add storage button, rather than a popup. While reviewing a laptop I probably see ads asking to renew or extend an anti-malware subscription slide in more often than you do, so I can feel that pain. 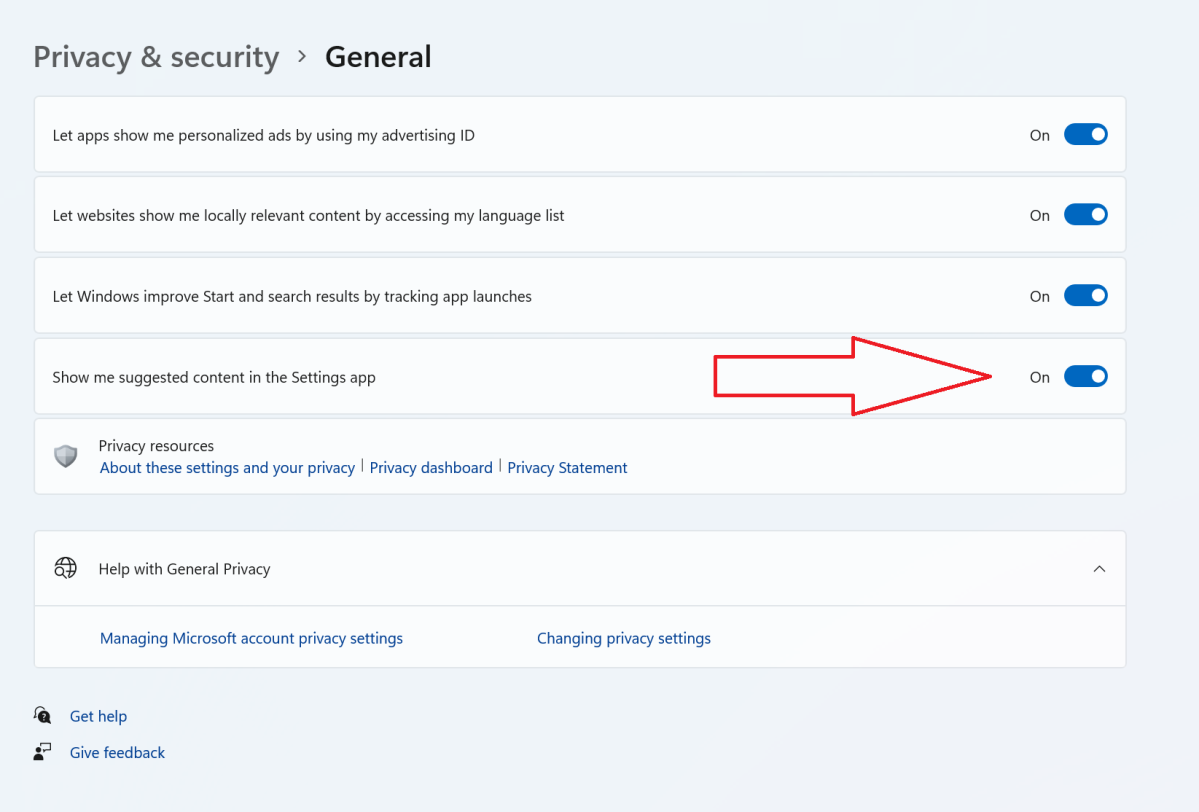 Suggested content really hasn’t shown up in the Windows 11 Settings menu yet, but you can toggle this off if it worries you.

I don’t even want to see Windows 11 suggest tips and tricks — and I help publish tips and tricks for a living! What I do want to see, however, is Microsoft publish even more tips and tricks, but do so in a manner that rewards users that go and look for them within the OS. Today, that’s the Windows Tips app. Tomorrow, maybe a rebranded Feedback Hub is the answer.

I’m sympathetic, then, to users who feel like they don’t want to be bombarded with additional notifications or ads that upsell Microsoft services. But I do think that Microsoft deserves to let users know of what new things they can do with a Windows PC, and establish something or somewhere they can turn to when their thoughts turn to the question What can I do?

So, no, you’re not going to see me stump for a MySpace-like collection of ads and services, zipping around your desktop, and you never will. Nor do I want to see Microsoft stepping in to suggest I Bing it or subscribe to Microsoft 365. What I am saying, however, is that there should be a time and a place for Microsoft to tell you what’s here and what’s coming to Windows, and we’d all benefit from more communication. And if that’s ads, well, so be it.